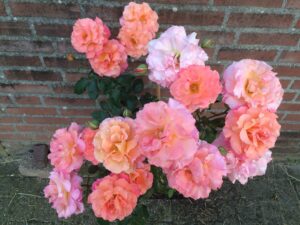 Since I was a child, I have loved, read and written poetry. Before 2002, writing poetry has been an essential part of my life. When returning to Switzerland in 1996 after working on a PhD in the United States, I started publishing. Two books of poetry appeared in 1998 (“Nicht gegen uns selbst immun”) and 2000 (“am ohrenäquator”), both by Axel Dielmann Verlag (Frankfurt a.M.). Both books are still available. I also wrote essays for newspapers, have been published in anthologies and magazines and translated poetry from Russian and American into German.

Around 2002, I stopped writing poetry, driven by the strong desire to return home into the poetry of reality beyond words. I felt imprisoned into words, into my mind. I yearned to live in my body, in my emotions, at one with the Earth and Her miraculous life unfolding.

Sharing my Quest with Others

After moving to the Netherlands and giving birth to my two daughters in 2005 and 2008, I started coaching women with “Levensruimte” in the end of 2008. “Levensruimte” gave a frame of research to my quest for returning home into life, reaching out for others with the same desire. Many of you know me from that period. I have been working with women individually and in groups, women who were longing for a slower pace and more depth in their lives, often after the experience of burnout. I have had a wonderful time sharing and growing with many of you, and I think of you with gratefulness and love.

After publishing my Dutch book “Leven in wat je Doet” in 2016 – a book about my personal journey and work with others on slowing down and stopping the “I have to” – I felt that “Levensruimte” was completed. I had developed and shared what I wanted to share, as far as this could possibly be expressed in descriptive words. I had met many wonderful people, made friends in the Netherlands and went through the necessary process myself so to reclaim more freedom and fulfillment in life.

By owning this freedom, especially after moving to the Brabant countryside three years ago, I realized that the personal emotional work I had been doing was touching just one layer of the veil of separation from life. There is also a collective layer in it, totally enmeshed with the personal, a conditioning that holds power because it forms the very foundations of our collective lifestyle and therefore can easily remain unseen. Even in the time of “Levensruimte”, doing so much research on my own functioning, it never occurred to me to question the authority of the system I lived in, though I felt its violence and control. I thought it was my problem that I couldn’t fit in well, and that, if I only worked enough on myself, I would be able to cope with its hard “reality”.

By being in nature more than in society the last three years, the mechanics of our civilization became more clearly visible to me. I realized that this patriarchic, capitalistic, consumer-based system is not a natural reality but created by mental constructs. By seeing this I have been released more and more from the strangling power of this system. A power that had trapped me for decades with its relentless frame of guilt and disempowerment. Though observing that I am constantly prone to feelings of guilt, I hadn’t realized before that the idea of obligation – having to pay back, to be “of service” to the system in order to be released from guilt – was just an inner reproduction of the control that is ruling our civilization. I understood that even after 100 years of emotional work I wouldn’t be able to let my own conditioning be dissolved when still giving authority to the basic assumptions that keep me imprisoned.

I started to question whether the sort of “security” the system proposes has a real foundation, whether all of the comfort offered by our western lifestyle is what I am truly yearning for, and what the price is we pay and all of life pays when we buy into the system’s beliefs. This kind of questioning allows space for a lifestyle different to what I can imagine now and makes an end to servitude. By letting go of my attachment to the basic assumptions of the system, the underlying emotions of unworthiness, shame and fear become de-pressed, and the dynamics of their potent waves undo the ties to a destructive, violent lifestyle.

Joy of Life and Poetry

In questioning the authority of the system, a fundamental belonging to the Earth itself is reinstalling itself. I understand that what I had been taught was “reality” since I was a child, has no substance of its own, that all these structures are man-made and dissolve by themselves when not given power. Only those structures that really sustain life will remain.

What remains when the artificial concepts dissolve is the reality of Life, of the Earth, of the Cosmos. The joyful explosion of the living reality in me brings me into a vivid inter-being with the natural realms, with animals and with plants, with the moon, the stars, the blue sky, the wind, the sunlight, the seasons. It moves me to grow food and collect herbs, making simple remedies. My health and vitality have improved in ways I could never have dreamed of, having been depleted for decades. Living with goats, chicken, cats and bees, who are sharing their so diverse beings with me, teaches me more about joy of life, about inter-being with different kinds of “families” and about living intelligence than I could have ever imagined.

And in this re-turning to the essence of life, poems have come back to me, inspired by this deep connection with life, with others, with the cosmos. I realize now that my poetic intuition had been crushed by the weight of the collective conditioning that is driven by control und guilt. Poetry can only breathe in a sphere of freedom, of sovereignty. Poetry is not describing life, is not taking it as something fixed, but is co-creating life in a multidimensional reality. As long as enslaved mentally to the system, poetry somehow misses the point. But poetry is not only the result, but a beautiful means of liberation. With all the emotions of fear, grief, rage, tenderness and joy drenching it, it helps the poet and the reader to regain her or his sovereignty. It becomes a poetry of life, changing the very tissue of our days.