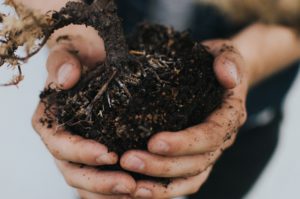 I am turning up the lawn, preparing my vegetable garden for next year. After a while, my hands and shoulders begin to ache. I am not used to this kind of work. I feel the heaviness, the density of the earth. This heaviness triggers resistance in me: I can’t do it. I can’t create a garden.

The earth has no resistance

Time to pause. I gaze at the piece of lawn I have just cut off horizontally with my spade, roots and all, and thrown it into a hole in the earth. The grass does not resist being thrown into the dark. It’s lying there peacefully, ready to be covered with a thick layer of soil. Ready to become soil itself. The earth is dense, but it has no story about its density. It lets itself be moved without a struggle, surrendering to cosmic and human creation.

In the dark of the earth, there are no stories

It’s me telling stories when confronted with earth’s density. Stories about my own inability “to do it”: I’m too weak, life is too heavy, it’s overwhelming. I’m always afraid of running out of energy, yet busy with small and big projects. Learning, achieving, transforming.

I realize that any moment in my life when I feel at a loss, when something feels “too heavy”, is an invitation to become soil. When something is too heavy to do, it’s a sign that I want to do too much. My ideas, in this case my ideas about the garden, then are not in line with reality. When I let go of my ideas, I am ready to be moved by creation instead of wanting to shape it myself. Now I become the garden. Returning my ideas back to the earth, I face the unknown, the darkness of the earth in myself. Becoming soil, I give life the chance to create something new and fresh.

In the spring, a new plant will grow out of the soil. A plant that can feed, a plant that can enchant with its beauty. The seeds are already there, waiting to sprout when the winter has ended. They need fertile soil to grow in. This soil comes to being by the plants of this year rotting, becoming soil again. What a chance to let go and rot in the earth with the grass. To become one with the earth, become soil myself. Not to resist heaviness anymore, which takes so much energy. Just let myself fall.